Michael Unwin is deeply passionate about the process of growing grapes and turning them into wine. His passion for winemaking spans 35 years. As a young New Zealander, he studied horticulture and then travelled to Europe, where he started working for a champagne maker. In the decade that followed, his learned the art of winemaking, travelling to all areas of Europe working with some of the highest regarded experts in the field.

In 2000, Michael and his wife Cat (a fellow Kiwi), established Michael Unwin Wines in Ararat. From 2004 onwards, their purpose-built winery in Beaufort became an iconic and recognisable landmark for anyone travelling along the Western Highway. At that location, their cellar door enjoyed a constant flow of customers; some coming on a designated day trip, others scheduling in a wine and tapas treat on the weekend, and some stocking-up of their favourite drop on the commute between Ballarat and Ararat or Horsham.

In early 2020, Michael and Cat closed the Beaufort site and reopened the vineyard, winery and cellar door on Remembrance Drive, Windermere – ten minutes west of Ballarat. The site has allowed Michael to realise his dream of being an entirely independent winemaker, where everything from grape growing, vinifying, bottling, packaging, warehousing, distribution and public tastings and sales is done at the one location.

An advocate for sustainability, Michael has built the cellar door, winemaking, barreling and bottling sheds on an earthen floor – to significantly reduce the carbon footprint of the site. This unique approach is something unheard of in the Western world. The winery is also run on solar power, enabling the operations to be entirely off-grid. In the 100 acres of land on which the winery sits, Michael has personally planted tens of thousands of trees and plants (many of which are part of the Friends of Forgotten Woodlands project) that contribute to the health of the soil, create a home for bird and wildlife and of course, allow visitors to the winery to enjoy picturesque views and country surroundings.

Michael and his staff look forward to welcoming you to Ballarat’s own winery. 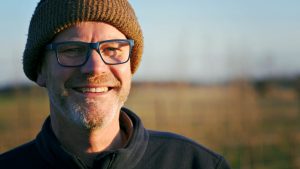